On August 3-6 we had our Jr. / Sr. High Camp at ABC. Pastor Nagasawa (a 20-something pastor from Hokkaido came with his wife – pictured in the front in center) and spoke about the topic of “worship from our heart”. It was a great 4 days together! We hope to get a video put together soon but for right now you can take a look at a few photos. The kids divided up into groups and practiced leading the rest of the campers in a song that they each prepared. On the final night they dressed up in yukata (summer kimono) and jinbei (a Japanese style shorts and top that men wear) that are often worn at summer festivals and worshipped together with great joy. It was inspiring to see them dancing around and enjoying praising the Lord together.

The chapel, set up for worship band practice… 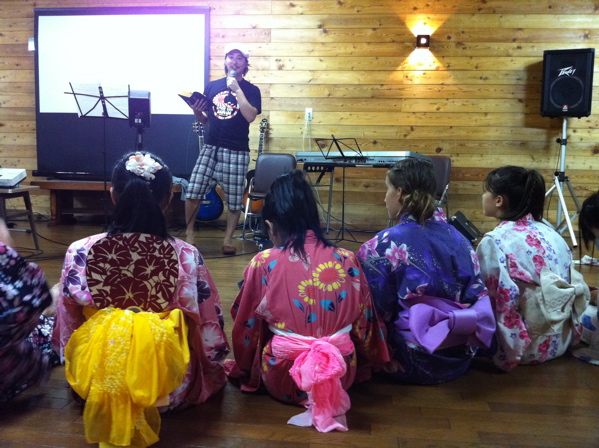 Pastor Nagasawa, speaking to the young people on the final evening.

Listening to each others’ performances… 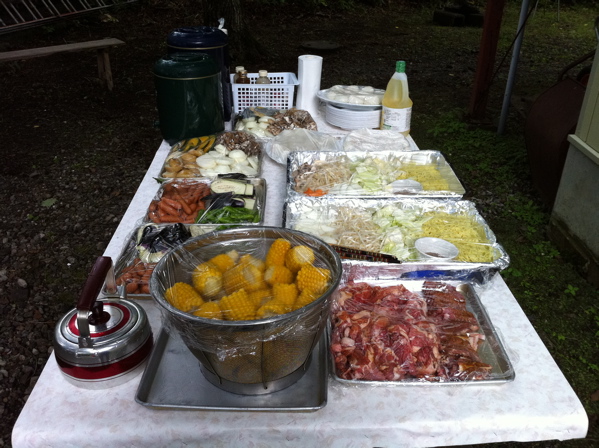 What do you think of when you hear “BBQ”? In Japan that means fried noodles, various meats, and lots of vegetables all stir fried on large “teppan” or steel trays over the fire.

Throw in some green peppers, pork, and chicken…. and then ladle some delicious BBQ sauce over all of it after you’ve cooked it up…. fantastic!

For dessert, we bake bread dough, stretched over bamboo poles over the hot coals. When it is baked golden brown, you take it off the stick carefully, and put butter and cinnamon sugar into the opening in the dough. Seriously delicious…

Andrea Johnson and her crew of workers in the kitchen for this week! 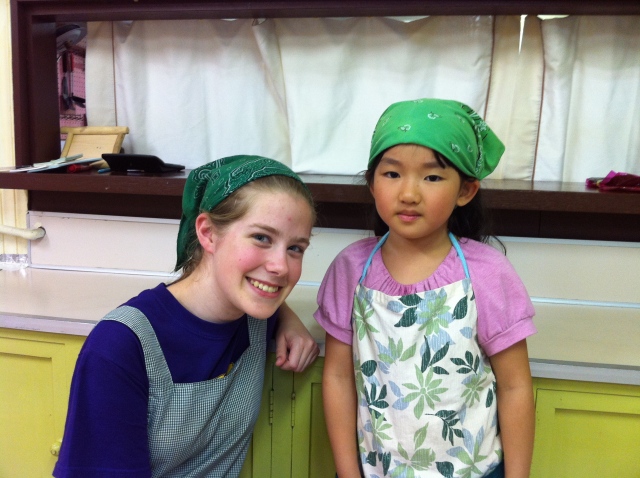 Stephanie Linquist and Hannah Park were both volunteers in the kitchen. Stephanie was visiting in Japan with her cousins Sam, Lilla & Sky Johnson and helped out at two of our camps. Hannah was helping out at Akagi Bible Camp this summer with her parents Kyoung Ho and Joy Park, recently arrived missionaries from Korea.

A camping facility operated by the Japan Covenant Church (NSKK).
View all posts by abcjapan →
This entry was posted in Uncategorized. Bookmark the permalink.